New Adder On LSE Purchases From NYSERDA Proposed As NYSERDA Funding Mechanisms; May Tilt Market For LSEs With Ability To Self-Supply

Of most note is the proposal to create a new Tier 4 clean energy standard (CES) specific to New York City (Zone J). The Tier 4 CES would, as further discussed below, be limited to new resources delivering power and attributes to Zone J which also meet an "additionality" requirement

The White Paper recommends that the Commission grant NYSERDA authority to procure environmental attributes from up to 3,000 MW of Tier 4 resources, through one or more solicitations, before seeking additional approval from the Commission

The White Paper proposes that, "because Tier 4 is an integral component of achieving the statewide 70 by 30 Target," it should be the financial responsibility of all LSEs serving retail load in the territory of electric distribution companies

As proposed, NYSERDA would purchase Tier 4 RECs from eligible suppliers, on behalf of LSEs. After selling a portion Tier 4 RECs as described below (specific customers, etc), NYSERDA would sell the remaining Tier 4 RECs to the LSEs for compliance with the LSEs’ obligation. Each LSE would be obligated to purchase qualifying Tier 4 RECs in proportion to its overall share of statewide load. The program would be administered in a manner similar to the process approved by the Commission for the zero emissions credit program. The contracts between NYSERDA and the LSEs for Tier 4 would be based on forecasts of load, and would utilize a balancing reconciliation at the end of each program year such that each LSE will have purchased the correct proportion of Tier 4 RECs on an annual basis.

NYSERDA would sell Tier 4 RECs to LSEs at a price that reflects its net procurement costs – including a deduction of any revenue received from the sale of Tier 4 RECs through an open offer. This White Paper further recommends that any LSE that has obtained Tier 4 RECs independent of their statewide obligation may retire those Tier 4 RECs and reduce their pro-rated Tier 4 purchase obligation commensurately.

The White Paper also proposes that any Tier 4 procurement authorized by the Commission be subject to a price cap. For generation projects that do not directly pay the cost of new transmission facilities, and therefore bear transmission costs comparable to projects typically selected under Tier 1, the White Paper proposes to cap the expected cost of any Tier 4 RECs at an amount benchmarked to prevailing Tier 1 REC prices.

A Tier 4 vintage requirement would be established providing that an eligible project’s date of commercial operation must be on or after the date of any Commission order that may result from the White Paper.

The supplier energy baseline requirement holds that Tier 4 RECs would only be compensated if and to the extent renewable generation is delivered to the NYCA that exceeds the historical baseline of renewable energy that the supplier and its affiliates have historically delivered to the NYCA. The purpose of this requirement is to ensure that Tier 4 deliveries are not met through re-directing the use of existing resources in a way that provides no net benefit to the State. NYSERDA and DPS recommend that the historical baseline for this requirement would be calculated using the average of the three most recently reported years prior to the establishment of Tier 4, and seek comments on this proposal.

The supplier Greenhouse Gas (GHG) baseline holds that Tier 4 RECs would only be compensated so long as the associated energy represents a net increase in the supplier’s total renewable energy generation as compared to a baseline. The purpose of the supplier GHG baseline is to ensure that the energy associated with the Tier 4 RECs is not being backfilled by fossil fuel-fired resources supplied to the historic recipient of such energy. The supplier GHG baseline would be calculated, in MWh generated from renewable energy resources, using the average of the three most recent years prior to the establishment of Tier 4.

Because the purpose of the Tier 4 program is to increase the penetration of renewable energy within zone J, the only environmental attributes that would create Tier 4 RECs would be those associated with demonstrable increased delivery of renewable energy into zone J. Applicants may satisfy the delivery requirement in two ways: by locating a utility-scale eligible resource directly in zone J, or by demonstrating that the eligible resource will be delivered using a new transmission interconnection into zone J. A transmission interconnection into zone J will be considered 'new' if it electrically interconnects into zone J after the date of any Commission order authorizing Tier 4. Suppliers seeking to qualify under Tier 4 may demonstrate that their resource is deliverable into Zone J through documentation derived from the appropriate NYISO process. A determination by NYISO that the resource qualifies as a capacity resource for zone J would satisfy this requirement, but need not be the only basis upon which a resource may establish its ability to deliver renewable energy into zone J. And, to be clear, a resource need not participate in the zone J capacity market to generate Tier 4 RECs, the white paper states

Concerning Tier 4 procurements, the white paper notes, "For large projects involving new transmission facilities, it may be necessary for NYSERDA to enter into transactions involving more than one purchaser and/or to re-sell some of the Tier 4 RECs it has procured. There are two potential aspects of a multi-party arrangement that should be considered separately. First, a new transmission project delivering renewable energy into New York City may be of commercial interest to New York City LSEs or other large buyers, such as the city government itself."

"This White Paper therefore recommends that NYSERDA have discretion to purchase any percentage or fixed quantity of RECs delivered by a selected project, and to enter contractual arrangements with more than one entity as may be necessary. Further, if a seller has obtained fixed PPA pricing with a zone J LSE or end-user for some but not all of the energy from a project, this White Paper recommends that NYSERDA have authority to procure both Fixed and Index RECs separately from the same project, if doing so results in the lowest levelized net cost. To be clear, were NYSERDA to enter a multi-party transaction, its purpose would be to advance the statewide aims of the CLCPA by realizing economies of scale through the collective purchasing power of state and municipal agencies, not to provide any subsidy or local benefit to any individual LSE or New York City," the white paper states

"To help defray the cost of the Tier 4 program, this White Paper recommends that the Commission grant NYSERDA authority to re-sell the Tier 4 RECs it procures through an open offer in which any purchaser, including Local Law 97 compliance entities, may participate. This White Paper recommends that NYSERDA price such offers competitively, subject to a price floor set at its own net levelized procurement costs (including administrative costs)," the white paper states

The white paper proposes a new adder be included on attributes sold by NYSERDA to LSEs, inducing ZECs, to fund administrative costs of NYSERDA

Additionally, while all entities may self-supply Tier 1, utilities, either under current mechanisms or any future that includes a potential for ratepayer-backed recovery if the utility receives approval for a renewable contract, may have more accessible opportunities to self-supply

"NYSERDA anticipates having an adequate quantity of Tier 1 RECs, ZECs, and Tier 2 RECs (if adopted) available for sale in 2021 and therefore proposes to fund its administration through an adder mechanism for these programs beginning in 2021, through which its administrative costs for the respective program(s) would be allocated across the attributes NYSERDA sells to LSEs in each year, via a commensurately-increased attribute price or an increased LSE rate, depending on the approach taken to attribute disposition," the white paper says 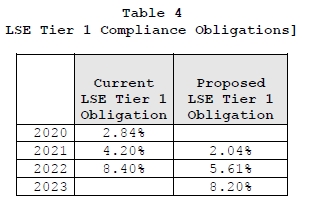 The white paper also proposes a new notice requirement for LSEs, such as ESCOs, who intend to meet theTier 1 requirement via self-supply rather than the NYSERDA procurement

"[J]urisdictional LSEs that intend to meet their Tier 1 compliance obligation through self-supply should notify NYSERDA in writing, with sufficient detail to provide NYSERDA assurance that the self-supply strategy will succeed," the white paper says