Staff of the Public Utility Commission of Texas have filed an updated draft to the electric scope of competition report which now includes Staff's proposed legislative recommendations, including a recommendation that the Legislature clarify that an electric vehicle charging station is not an electric utility or retail electric provider.

"Similar to the vehicle-charging paradigm is a service in which electric service equipment is brought to a fixed location for temporary use. For example, a generator might be rented for use at a construction site. Market economics would dictate that this transaction be priced on the wear-and-tear to the equipment, rather than a daily or weekly fee. For this reason, the decision by the business to charge by the kilowatt-hour should not dictate that the transaction constitutes a retail sale of electricity. The PUCT proposes that the Legislature clarify that supplying electric service equipment using a kilowatt-hour pricing mechanism does not constitute a sale of electric energy to a retail customer and that such a supplier is not an electric utility or retail electric provider," the Staff draft states

The Staff draft noted that Section 15.023 of the Texas Utilities Code authorizes the PUCT to impose a penalty against a person regulated under the Code who violates the Code or a rule or order adopted under the Code, and further prescribes that the PUCT consider a number of factors in determining the penalty, including, "the economic harm to property or the environment," and, "the amount necessary to deter future violations."

Under Section 15.027(a) of the Texas Utilities Code, an administrative penalty assessed by the PUCT must be paid to the comptroller. Such payments may deter future violations but do not directly address economic harm to property or the environment, the Staff draft notes.

"For this reason, parties have in recent years reached settlements in which the regulated entity, in addition to paying an administrative penalty, also agrees to make a contribution to a fund that specifically assists the affected class of customers. For example, a retail electric provider that did not properly notice customers of a change in prices might contribute to a third-party agency that provides bill payment assistance to customers," the Staff draft notes

"The PUCT proposes that this tool be formalized by allowing a portion of an administrative penalty to be directed to a third party entity approved by the PUCT. Such a program would operate in a manner similar to Supplemental Environmental Projects (SEPs), as authorized by Texas Water Code Section 7.067," the Staff draft notes

During a recent open meeting, Commissioners had discussed the issue of customer refunds or restitution in complaint proceedings and/or broader enforcement proceedings. Commissioner Arthur C. D'Andrea had noted that while the Commission may be able to provide restitution to an individual complainant in a contested complaint case, to the extent the behavior was not specific to an individual customer, it feels "strange" to only provide relief to an individual petitioner whose complaint includes a request for relief (and therefore opens an avenue to provide restitution to such specific customer), since penalty amounts otherwise arising from the proceeding are currently required to be directed to the state's general revenue.

During such discussion, the PUC's director of Office of Policy and Docket Management suggested that the specter of administrative penalties is a powerful tool to get parties to agree to various terms, which could include restitution funds. However, to the extent the respondent is not amenable to settlement, such an approach would not resolve the current situation with respect to the disposition of penalties.

"A predominantly electronic system for accepting filings has numerous benefits for both the agency and outside parties. However, there are instances in which paper copies are necessary for PUCT staff and Commissioners to analyze a filing. Many such filings are voluminous, consisting of hundreds and sometimes thousands of pages. Therefore, cost shifting from companies and other parties to the agency is a concern. To offset this cost, the PUCT recommends that it be granted statutory authority to charge fees to certain parties that make filings with the PUCT. The filing fee would be set at a level not to exceed the costs incurred by the agency," the Staff draft recommends

As contained in an earlier draft, the updated draft notes that, since 2002, rates in the ERCOT competitive market have decreased by 31% when adjusted for inflation.

The revised draft includes a re-formatted chart that showed the same information as the chart from the original draft shown below: 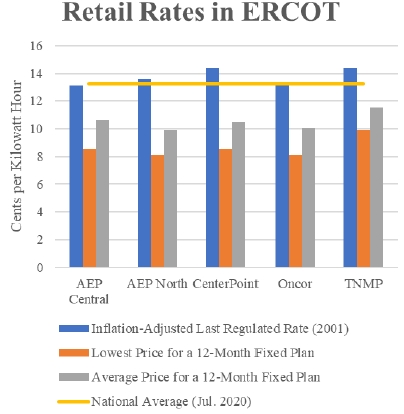