The Staff of the Public Utility Commission of Texas have filed a discussion draft that would, among other things, modify the current retail electric provider certification requirements

Under the discussion draft, a REP would be required to maintain the financial requirements of subparagraphs (A) or (B) listed below on an ongoing basis.

(A) A REP may maintain an executed version of the commission approved standard form irrevocable guaranty agreement.

(i) The guarantor must be:

(I) One or more affiliates of the REP;

(II) A financial institution with an investment-grade credit rating; or

(III) A provider of wholesale power supply for the REP, or one of such power provider’s affiliates, with whom the REP has executed a power purchase agreement.

(ii) The guarantor must have:

(I) An investment-grade credit rating; or

(II) Tangible net worth greater than or equal to $100 million, a minimum current ratio (defined as current assets divided by current liabilities) of 1.0, and a debt to total capitalization ratio not greater than 0.60, where all calculations exclude unrealized gains and losses resulting from valuing to market the power contracts and financial instruments used as supply hedges to serve load.

(B) A REP may maintain an irrevocable stand-by letter of credit payable to the commission with a face value as determined in [the chart below] based on the number of electronic service identifiers (ESI IDs) the REP serves. Additionally, for the first 24 months a REP is serving load it must maintain not less than one million dollars in shareholders’ equity. 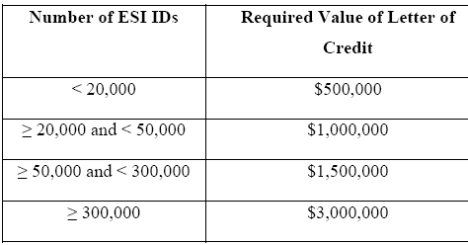 Among other things, the discussion draft's proposed financial requirements differ from the current rules as follows:

• For the option which does not rely on an irrevocable stand-by letter of credit, the REP would be required to use a third-party guarantor (which may be an affiliate). Currently, a REP may itself meet the requirements by having an investment-grade credit rating or tangible net worth greater than or equal to $100 million (and other metrics)

• The current level of the stand-by letter of credit for access to capital is a flat $500,000. As noted above, the discussion draft would set this as the minimum level, but would increase the requirement for higher levels of ESI IDs served

In terms of technical and managerial requirements, the discussion draft expands the behavior which disqualifies an individual from controlling a REP

Specifically, in addition to a POLR drop, an individual who exercised direct or indirect control over a market participant that had its ERCOT SFA terminated, or which exited an electricity or gas market with outstanding payment obligations that still remain outstanding at the time of the application, would not be allowed to control a REP, or be used to meet the managerial requirements set forth in the rule.

Furthermore, the POLR drop provision would also now extend to, "a person who was a principal of a REP that experienced a mass transition of the REP’s customers under §25.43 of this title (relating to Provider of Last Resort (POLR)) to the provider of last resort (POLR) at any time within the three months prior to the mass transition." (e.g. including a principal of a REP who left shortly before the POLR drop occurred)

The discussion rule would also require REPs to respond within three working days to any commission staff request for information.

The discussion draft would also impose a reporting obligation on ERCOT and TDUs concerning REP principals as follows: "To the extent an independent organization or TDU is aware that a person who is otherwise barred from exercising direct or indirect control over a REP is acting in violation of this section or other commission rules, the independent organization or TDU has an affirmative duty to report this information to the division of the commission charged with enforcement of the commission’s substantive rules."

Specifically, under the discussion draft, "Commission staff may direct the registration agent to cease processing move-in and switch requests from a REP for any of the following reasons," including that the REP has entered into a payment plan with the applicable independent organization or the REP is engaged in bankruptcy proceedings.

In contrast, current rule allows Staff to file a complaint to seek suspension of a REP, with the REP prohibited from enrolling new customers upon a PUC order, but the discussion draft would grant this authority directly to Staff

Additionally, it has been common in certain bankruptcy proceedings of large REPs (or those of their parent) for the REPs to continue to enroll new customers during restructuring, when DIP financing as been obtained

The draft would also change the time period for REPs to respond to complaints from 21 days to 15 days, including for complaints related to slamming