Complaints Against Retail Suppliers Down "Significantly"

Staff of the Illinois Commerce Commission's Office of Retail Market development have filed an annual report on the retail electric market, covering the 12 months ending May 2022.

The cost comparison data includes municipal aggregation rates in the ARES data. The vast majority of residential shopping at Ameren is done through opt-out aggregation

"[T]hese numbers are averages and almost all customers are either below or above the average," the report notes

1. These are total, or aggregate, savings. The savings for almost all individual customers differ from these averages;

2. These calculations are ex-post calculations and do not take into account how the ComEd default rates would have been different had more or fewer customers stayed on the utility’s default supply service;

3. Most of the ARES that serve residential customers have at least one offer that features a renewable energy or "green" component that is higher than what is required under the Illinois Renewable Portfolio Standard. The average rate information collected from the ARES include the (usually higher) prices associated with those offers;

4. Not captured in these numbers are rewards and incentives that are not part of the ARES electric supply rates. For example, several ARES offer one-time gift cards as an incentive to sign up for a particular offer; other offers contain rewards such as airline miles and other non-rate benefits. However, those non-rate benefits are difficult to quantify and include in such calculations. Additionally, Staff would have to make several more assumptions and receive far more additional detailed data from the ARES community to quantify the non-rate benefits offered by ARES.

For the residential market, the lowest rate charged in the Ameren territory for the reporting period was a variable rate product of 3.4 cents per kWh in May 2022. The highest rate charged in the Ameren territory also consists of a variable rate of 21.99 cents per kWh in May 2022. In the ComEd territory, the lowest reported residential rate was 1.14 cents per kWh in June 2021, which was a variable product. The highest rate charged in the ComEd territory was a fixed rate charged from November 2018 through December 2021 of 28.37 cents per kWh. "While none of these rates included additional fees, several suppliers charged separate fees in addition to the reported rates, ranging from $0.19 a day to $15 a month, in the past year. Additionally, several ARES offer subscription or flat fee products pursuant to which customers pay the same monthly amount throughout the life of the contract, which tends to be twelve months. These products ranged from $19 to $389 a month," the report says

During the reporting period, the average rate for a municipal aggregation program in the ComEd territory was 6.202 cents per kWh and 4.498 cents per kWh in the Ameren territory. Consistent with previous reports, the average rate for municipal aggregation programs does not include contracts with "green" offerings or those offering the same rate as the Price to Compare of their respective electric utility.

Statewide, the share of residential municipal aggregation customers decreased from 57% of all residential ARES customers in May 2021 to 55% as of May 2022.

Of the 587,466 residential ARES customers in the Ameren Illinois territories, 83% are municipal aggregation customers

Measured by Herfindahl–Hirschman Index values, the ComEd residential market remains competitive, while all other markets show moderate to high concentration, as shown below 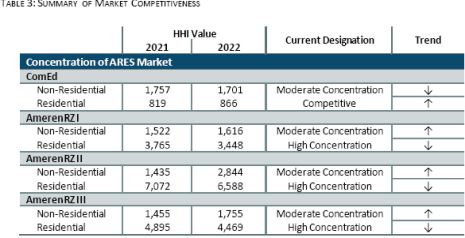 The report notes, "On May 27, 2022, the Governor approved Public Act 102-0958 which amends the Public Utilities Act and the Consumer Fraud and Deceptive Business Practices Act. The Act states that a license to operate for an ARES, AGS, or an ABC is not property, and the granting of a certificate or license does not create property interest. Additionally, the Act aligns the remedies available to a complainant to the Commission, regardless of whether a complaint is brought pursuant to the PUA or the CFA, thus streamlining the enforcement process. The Act also requires ARES and AGS contracts to include an internet address, instead of an email address, to which a consumer complaint may be directed to the Commission under the CFA."