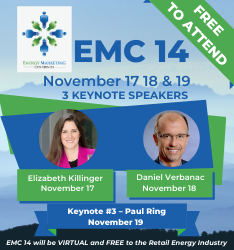 NRG has updated its financing plan for the Direct Energy transaction and is now expecting to fund the purchase price using a combination of increased cash on hand and approximately $2.9 billion in newly-issued secured and unsecured corporate debt -- a $0.5 billion increase from the previous estimate. The portion of the purchase price previously expected to be funded by $750 million in equity/equity-linked securities is now expected to be funded with a combination of the expected increases of 2020 cash on hand and debt to be repaid in 2021 with future targeted asset sale proceeds.

As part of NRG’s ongoing portfolio optimization strategy, NRG expects to realize a minimum $250 million net proceeds (net of debt repayment associated with assets sold) over the next 6-12 months from ongoing and prospective monetization of, "non-core assets and businesses."

The first $200 million in net proceeds will be used to repay a portion of the increased leverage associated with the Direct Energy acquisition in order to maintain investment grade metrics in 2021 and any additional proceeds will be available for capital allocation.

During the third quarter of 2020, NRG amended its existing credit agreement to, among other things, increase the existing revolving commitments by an aggregate amount of $1,075 million. The increase will become effective upon closing of the Direct Energy acquisition and total revolving commitments available at that time, and subject to usage, will be $3.7 billion.

In September 2020, NRG also entered into a revolving accounts receivable financing facility for an amount up to $750 million, subject to adjustments on a seasonal basis, and an uncommitted repurchase facility related to the Receivable Securitization for up to $75 million.

Finally, as of November 5, 2020, NRG had extended and increased its existing $80 million CDS LC facility by an incremental $87 million.

The incremental liquidity available under these facilities will cover approximately $2.0 billion of the $3.5 billion of incremental collateral needs associated with the Direct Energy acquisition, NRG said

Discussing its 2021 capital allocation, NRG disclosed that it has created a reserve of $15 million for continued small retail book acquisitions.

In terms of capital available for allocation in 2021, NRG reported $1.51 billion available, with $953 million applied to debt reduction.

As of September 30, 2020, NRG cash was at $0.7 billion, and $2.8 billion was available under the Company’s credit facilities. Total liquidity was $3.5 billion, including restricted cash. Overall liquidity as of the end of the third quarter 2020 was approximately $1.4 billion higher than at the end of 2019, driven by improved cash from operations and the increase in credit facilities of approximately $0.9 billion during the third quarter. This increase in credit facilities reflects mainly the additional liquidity associated with the new Receivables Securitization and Repurchase facilities but excludes the additional commitments to the Company's existing revolving credit facility which become available coincident with the closing of the Direct Energy acquisition, NRG said

"Due to limitations in sales channels in the East, [we] anticipate lower East customer count due to ongoing COVID-19 effects," NRG said

NRG continues, "to expect moderate COVID-19 impacts overall, with a larger impact in Texas partially offset by lower selling and marketing expense in the East."

As previously reported, NRG no longer reports quarterly results specific to its retail segment, instead reporting integrated results on a geographic basis.

For the Texas segment, NRG said that third quarter 2020 Adjusted EBITDA was $514 million, $67 million lower than third quarter of 2019. "This decrease is driven by a reduction of load due to weather and COVID-19 partially offset by lower supply costs resulting from reductions in power and fuel prices," NRG said