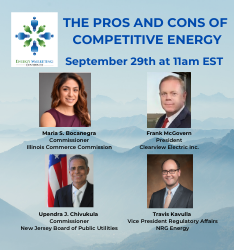 Complainant Has Asked PUC To Rescind Contracts Between Retail Suppliers, Customers Which Were Arranged By Competitor Alleged To Be In Violation Of Licensing Requirement; Return Customers To Prior Supplier Contracts

The attorney examiner instead set the matter for hearing

As previously reported, H.P. alleged that, "RES provided CRES [electric] and CRNGS [natural gas] aggregation and/or broker services in Ohio from a period beginning on or before July 2018 through at least May 2019, without obtaining certificates from the Commission." With respect to Fidelis, H.P. alleged that, "Fidelis' COO (and only acknowledged employee, Respondent Boucher) has engaged in conduct that makes Fidelis unfit to provide CRES or CRNGS [service]."

Among other defenses, the Respondents said that Boucher was under contract with or acting on behalf of one or more entities with active Commission certificates to provide competitive natural gas and electric services. Additionally, the Respondents said that the activities alleged in the complaint do not require a broker license, based on PUCO precedent (PUCO's prior finding that operating as a 'consultant' on natural gas or electric supply issues does not require a certificate unless an entity’s conduct actually rises to the level of 'engaging in the ultimate decision making process and entering into contractual obligations on behalf of . . . clients with respect to the provision of a competitive service')

See more background on the case in these stories linked below:

"Respondents argue against Commission jurisdiction because: (1) Complainant fails to describe a Commission-redressable injury attributable to Respondents’ alleged misconduct; (2) Respondents’ interactions with electric and natural gas customers do not constitute the actual provision of a competitive service requiring a certificate; and, (3) Respondents did not act as an entity regulated under R.C. 4905.26, 4928.16, or 4929.24 during a time period when they were not covered by a Commission certificate. The attorney examiner rejects each of these arguments. Complainant is not required to claim actual harm in order to invoke the Commission’s jurisdiction regarding the actions of CRES and CRNGS providers. R.C. 4928.16 and 4929.24; In re Office of the Ohio Consumers’ Counsel v. Dominion Retail, Case No. 09-257-GA-CSS, Entry (July 1, 2009)," the attorney examiner said

"Further, the determination of whether Respondents’ actions are considered competitive services that require a certificate, or whether any of the Respondents acted as a Commission-regulated entity during periods where it was not covered by a certificate, are both: (1) issues of fact that must be construed in Complainant’s favor for purposes of deciding the motion to dismiss; and, (2) matters that are within the Commission’s expertise and the normal practice of the regulated utility for the purpose of applying the Allstate test. Accordingly, the Commission’s jurisdiction is invoked both in terms of the construction of the complaint allegations in Complainant’s favor and the determination that the case is properly decided by the Commission, rather than through the civil court system," the attorney examiner said

"Further, even setting aside the presumption of facts in Complainant’s favor, the attorney examiner finds that Respondents’ defense claims are incapable of adjudication outside the realm of an evidentiary hearing to the extent that they involve: (1) assertions of agency authority; and, (2) fact determinations as to whether and when any of the Respondents acted in a regulated capacity as alleged in the complaint," the attorney examiner said